Mesaje : 74
Data de inscriere : 29/10/2009
In the neighbourhood of Ghelari- Hunedoara, Romania, about 20km from Valea Caselor (The valley with houses), a ‘pit’ furnace was discovered in 1895. Nearly a century later, an archaeological dig in the same region in 1980 found a similar furnace.
The furnaces were placed on the slopes of hills forming the valley of Valea Caselor such that the prevailing winds provided a natural draught via a chimney. There was no source of water nearby which could have powered bel-lows, but hand blown bellows were also employed.


Illustration of a 16Ce bloomery furnace described by George Agricola 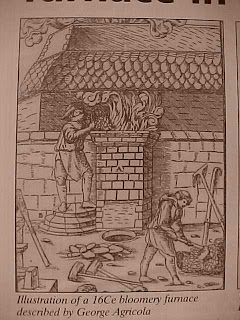 The pit-furnace discovered in 1895 is simi- lar to the one discovered in 1980 (Fig 1). It consists of a pit of oval section, dug into the bedrock of the hill. The pit was about 1600mm deep with its front enclosed by a stone wall. It was lined with clay bricks and the top covered by a flagstone. The flagstone could be removed for charging the iron ore, charcoal and lime. In the upper side of the furnace there was a chimney of oval section, aligned with the slope, thus assuring a natural draught. The front wall of the furnace was about 2.85m wide at its foundations which extended down to the bed rock.


1 Interpretation sketch of the iron furnace discovered in Ghelari-Hunedoara in 1895 Reconstruction made by the authors of the article
The lower side the furnace contained two holes; the larger was a tap hole for slag which was placed on the vertical axis of the pit and inclined to the slope of the hill; the smaller, which was placed a little to the left of the tap hole and separated from this only by a flag- stone placed on the narrow side, was used for blowing in air via bellows.
The foundations of a charging platform were found projecting from the top and in front of the supporting wall. The platform measured 2.20 x 2.80m, and the walls were 0.80m thick and survived to varying heights.
Archaeologists have dated these furnace to the 9th-10th centuries, three centuries earlier than the Corsican and Catalonian soles(smelting hearths) used in France and Spain in the Pyrenees (Ariege and Navarra).
They resemble much later furnaces discovered elsewhere in Europe, and described by George Agricola in his book ‘De re metallica’ and by Vanuccio Biringuccio in ‘Pyrotehnca’.
Agricola describes such an iron shop dated from the 16th century.
The furnaces at Valea Caselor were built high resembling the ‘Stuckofen’ furnaces of the Alps and the Carpathians. The pit-furnace had some constructional details that indicate it was a highly productive furnace for that time:
• A taper in the furnace pit slowed the decent of the charge as the charcoal was consumed (the charcoal was used as fuel and reducing agent). The furnace could be operated very easily with less maintenance than required for the later Stuckofen in the Alps or for the Osmond furnaces of the Scandinavian countries.
• A cap covered the top of the furnace which was opened for charging but closed afterwards to keep the heat inside.
• A dynamic draught was created by the inclined stack. The furnaces were built on the side of the hill experiencing the prevailing wind so that the depression created behind the hill ridge would increase the air draught in the furnace.
The fact that people knew the phenomnon of the turbulent currents compensated to a certain extent the absence 'of hydraulic power for driving bellows.
• The furnace had a tap hole for removing slag and the iron bloom reduced from the iron ore.
The furnace discovered at Ghelari, Hunedoara, does not clear up all the aspects of operation, but it offers interesting information. A model of the furnace from Valea Caselor was constructed by the Science Museum in London in 1925 (cat No 20/1925-115 - now in storage) using original materials from the first furnace discovered in 1895.