Forumul Hunedoara » Istorie » The beginnings of ironmaking in Hunedoara, Romania

The beginnings of ironmaking in Hunedoara, Romania

Mesaje : 74
Data de inscriere : 29/10/2009
Archaeological excavations show that iron was known in the Capatho-Danube region of present day Romania from the first part of the ironage - Hallstat (800-300BC). During the early iron age, the metal was rare and expensive, but artifacts such as axes, hoes, weapons and plough shares appear. There is evidence that iron ore was mined and smelted at high temperatures (1500°C) to produce an iron for forging.This implies an advanced technological knowledge and experience. Bloomery furnaces were used consisting merely of pits dug near the top of hills (Fig 1). These were lined with refractory 1 Typical natural draught shaft furnace of the early iron age periodclay and dried prior to charging with alternate layers of charcoal and iron ore.


The fire burnt continuously for several days partially reducing the ore to metallic iron. No slag wasremoved during this process. Air was supplied by the natural draught of the wind blowing up the side of the hill. The unreduced part of the ore formed a black slag that flowed from the furnace.
In Transylvania (north-west Romania) where the Hunedoara ironmaking region is located, the local population - the Dacians-came under the influence of both Greek and Scythian civilisations by the end of the 6th century BC. This symbiosis influenced their techniques of weapon manufacture. During the later iron age, Lat Tene (300 -50 BC) another event occurred in Transylvania which accelerated the development of ironmaking, this was the influ-
ence of the Celtic tribes, the Kentum group,the Celts most western branch. This contact with the Celts accelerated the evolution of ironmaking and processing techniques used by the local population. The development in the techniques of metal winning and processing came about in the Hunedoara region because it was an area rich in charcoal, gold, silver and slate. The climax was the establishment of King Burebista’s (?-44BC) fortress in the Hunedoara's mountains.
The location of this powerful Dacian fortresses from Sarmizegetusa in the proximity of the iron mines at Ghelar and Teliucis not at all accidental.
At that time, the furnaces used by the Dacians to reduce iron ore had the shape indicated in Fig 2. Air was blown in through the bottom using bellows. Such a furnace had the advantage of a removable tuyere made of refractory material. The iron taken from the furnace was forged into bars or flats, each being checked for quality and notched if passed.


The Roman occupation
The rich deposits of gold silver, salt and iron from Dacia were well-known in the Roman Empire which attempted to occupy the region through several military campaigns in the years 86 -89AD and 101-102AD. Dacia was finally occupied by the Roman armies, led by the Emperor Trajan in 106AD. A military diploma found at Porolissum (northern Dacia), dated 11 August 106AD , mentions Dacia as being a Roman province. The Roman economic politics in Dacia was to continue mining gold and iron using Dacian workers. Clear evidence of iron ore mining in
Telyuc-Ghelari-Hunedoara under the Roman occupation are two epigraphs foundon monuments dating from the reign of the Roman Emperor Caracalla, and a commemorative
monument in Apullum (Alba-Iulia) dating from the reign of the Roman Emperor Antonius
Pius, a monument which represented an altar dedicated to Jupiter. The inscription reads:
Optimus Maximus Dolichenus -
Iovi Optima Maxima Dolicheno,
nato ubi ferrum exoritir...

Both monuments attest to the existence of the iron ore mining industry in Poiana Ruscai, Hunedoara, possibly a Dacian ironmaking shop used by the Romans.

In the neighbourhood of this site some 50t of slag with a high Fe content of 30-35% have been found. The furnaces consisted of square open hearths with sides of 0.8m with three walls lined with mica blocks about 80cm long and 5cm thick. Excavations found the bottoms of the hearths to con- tain burnt lime to a depth of 15cm. Lumps of iron weighing 5kg were also present. The forging furnaces were 2m in diameter and 2-2.2m deep. The side walls were smooth with no signs of burning. Nearby pits were filled with fine ground slag which probably served to slowly cool tools made
in the forging shops. The existence of these hearths prove that the inhabitants of the regions knew of the archaic procedures of thermal treatment.
The furnaces, iron processing and heat treatment techniques are specific to the Dacian population, demonstrating that the Romans operated a policy of using local workers to produce their requirements.

*The author is with SC Siderurgica SA,Hundoara, Romania 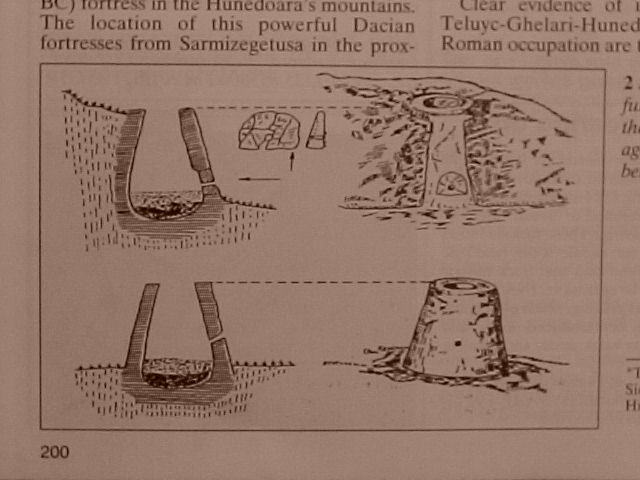 Forumul Hunedoara » Istorie » The beginnings of ironmaking in Hunedoara, Romania