2000 years of ironmaking at Hunedoara

Mesaje : 74
Data de inscriere : 29/10/2009
Evidence produced by historical research, indicates that ironmaking has been taking place in the Carpatho-Danube region in some form or other since the first part of the iron age (1200-500BC). The discovery and development of smelting in the region which now forms part of Romania - is attributed to the Geto-Dacians although local ironmaking came under the influence of both the Greek, and later on,Roman civilisations. The Celts also influenced the development of ironmaking technology, but local production managed to preserve some of the original methods and techniques. Ironmaking in turn affected the history of the area. The military activities and rule of the Dacian kings, Burebista (89-44BC) and Decebalus (87-106AD), for example, would not have been possible without the material Dacia was the last province to be added to the Roman Empire by the Emperor Trajan, in 106BC.
The town of Hunedoara is situated in Transylvania, close to the Dacian kingdom of Sarmisegetusa. Rich iron ore deposits surround the town, and, being easily accessible and readily reduced1, they made an ideal raw material for the developing local iron industry. Lumps of ore, smelted iron mixed in with slag, refractory materials and burnt lime have all been discovered in archaeological excavations undertaken in the area. A chemical analysis of the excavated materials is shown in Table 1. The furnaces were charged with charcoal, iron ore and lime. If the CO to C02 ratio corresponded, the iron oxides were reduced without removing the gangue made up of Al, Ca and Si oxides. To produce 1kg of iron, it was necessary to charge 3kg charcoal, and 1.7kg iron ore.
Roman Occupation
There is clear evidence of a local iron ore mining industry under Roman occupation of Dacia. One key discovery was that of a commemorative Roman column, located in oneof the smelting and ironworking shops. The column was formed of limestone and bore the text: Numini, Domini, Nostri, Marci Aurelii Antoni, Pii Felicis Augusti, Octavius Caius, Gaurius-Gaunianus, Sacendos Coloniae Apulensis ET Flavius Sotericus, Augustalis Coloniae, Sarmigetusae, Conductores FERRARIARUM. The column dates from the reign of the Roman Emperor Caracalla (138-161AD) and the text expresses the satisfaction of two leaders with the revenues generated by local iron ore mining and ironmaking.
Furnace technology
Shaft furnaces were used at the time to pro- duce solid sponge iron which was consoli- dated by heating and hammering and could be carburised by heating in charcoal. One furnace which marks a development in tech- nology, is now exhibited in the London Science Museum. This particular shaft fur- nace from the House Valley (Ghelar) near Hunedoara, dates from the 9th century. It was cut from rock, lined with refractory clay and fed with air through the bottom from bellows via a tube. It stands 1.6m high and has a top diameter of 0.6m and a bottom diameter of 0.32m. From the point of view of size and construction, this furnace was a technological shift from the open forms of smelting furnace used up until that time.
In the fifteenth century, ironmaking developed further and played a significant role in equipping the army of lancu of Hunedoara, the Romnian Waiwode. He was involved in the Christian opposition to the Ottoman expansion and is known for his defeat of the Turkish army led by Mohammed II, at Belgrade in 1456. The Hunedoara Castle with its estate were inherited by lancu's son, Matei Corvin, a great Hungarian king who granted significant favours to ironworkers in the area in order to further encourage efficient produc-tion of weapons and tools.
In 1509, the region came under the rule of Count George of Brandenburg who encouraged the development of tools, weapons and flat iron products. Documents from the Count's estate show that five smelting shops operated in that time.
By the eighteenth century, the number of iron shops had increased to fifteen according to the document: Ubarium seu nova connumeratio universorum bonorum ad arcem Vajda Huniadensem pertinentium.2 Hunedoara castle became the administra- tive centre of the domain and soon took on a role as a metal market. The old German ket) and many shops bore German names, such as agricultural tool shops (mavenschimiede) and forge shops (hammerwerker). Forging shops worked 26 weeks of the year. During summer months, they were obliged to work in the fields and during winter, the river which provided power for the forge hammer and bellows, froze over. Among the existing eighteenth-century documents are some of the books kept by the iron shops (Plosca, Baia Noua, Toplifa, Nadrab and Import) which show that flat and lump iron production was about 170t/y. In 1750, a blast furnace was commissioned at Toplifa (Hunedoara county) to produce pig iron. This was then refined in open hearth furnaces for sale to blacksmiths. Charcoal consumption was around 1950kg/thm. Fig 1 shows the blast furnace design drawn around 1800.
1 The Toplita blastfurnace (drawing 1800).

The main blast furnaces had a working volume of 6.94m3, were 6.69m high, had diameters of 0.735m (hearth), 1.58m (bosh) and 0.632m (neck). Two tuyeres were positioned at 0.479 and 0.98m high. The furnace was lined with rose mica schist, the first 1.6m of which was changed annually because of intense wear. Complete overhauls were made at 10-12 year intervals.
In 1813, a blast furnace was commissioned at Govajdie which had a 30m3 working volume and this was later upgraded to 60 m3. The air-preheated Calder was also replaced, first with a Wasseralfinger and then a Cowper preheater. The Govajdie shops specialised in cast iron. Around 5-7% of the pig iron output was refined by puddling at the Limpert shop On June 12th 1884, an 110m3 blast furnace was commissioned, followed by a 140m3 furnace in 1890 (Fig 2). Refining was undertaken using 12t open-hearth furnaces and two 6t Bessemer converters. This was the situation at the end of the 19th century and iron and steel production in the area has continued up until the present day.

2 The Hunedoara blast furnaces in 1898.
* loan Romulus is an engineer at Siderurgica SAHunedoara. He teaches at the Engineering Faculty at Hunedoara and is a candidate for a doctorate at Bucharest. ** Gaina Constantin is a technician at Siderurgica SA’s quality-control laboratory.
This paper was first presented at a symposium celebrating 110 years since the commissioning of the first Hunedoara BF in June 1994.
1 Today, steelmaking at Hunedoara, is in the hands of
Siderurgica SA, one of seven large Romanian steelplants. The works has some 3.6Mt/y steelmaking capacity, producing carbon, alloy and stainless steels.
2 Translates as: Urban description and inventory of allgoods existing in the Hunedoara domain 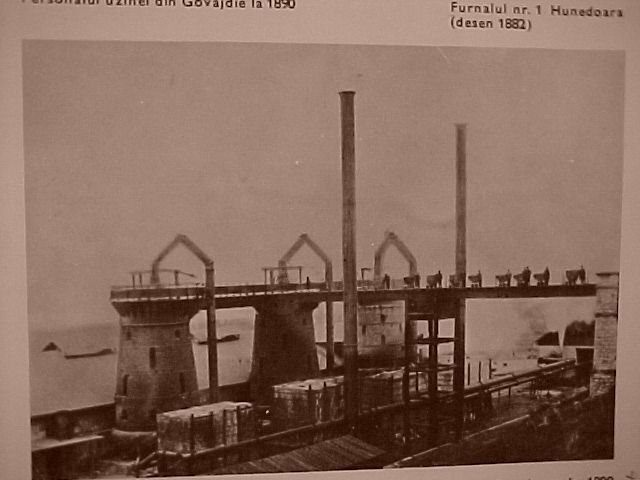